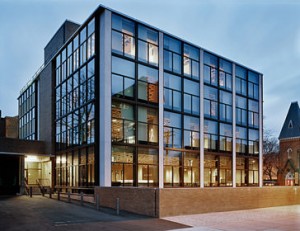 Louis Kahn’s first major project was this art gallery at Yale University. Being the first modern building on campus, this art gallery is surrounded by neo-Gothic structures. It was Kahn’s first commission, and is considered by many to be his first masterpiece. The building is constructed of masonry, concrete, glass and steel, and while this image shows a mostly glass window facade, its wall that is most viewed by the public is windowless, which can be seen in this image: 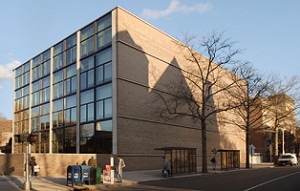 My favorite part of this piece of architecture, after doing some research, however, is the inside. Kahn was extremely innovative for his time, using wide open spaces for students to have studios and geometric shapes that had not been used before. For example, the ceiling of the structure is composed completely of tetrahedral shapes. 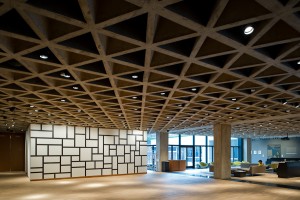 Kahn varied greatly from the Gothic architecture that was popular at the time, and broke out with his own style. The use of geometric shapes, which can be seen above, really stood out to me and helps this building stand out among its neighbors. Along with the ceiling, Kahn included a spiraling staircase that also utilizes geometry. Kahn’s management of lighting also impressed me. I think the natural light coming from the many windows combined with the strategic placement of more natural bulbs in the ceiling really allows the viewer to take in the whole space while not being distracted from the art. 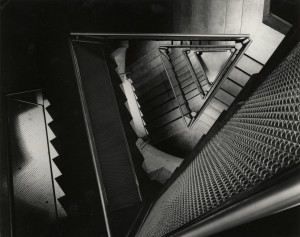