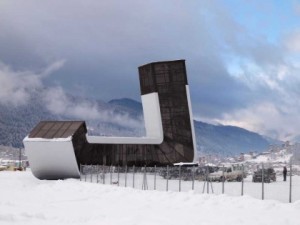 The Queen Tamar Airport is another part of Mestia, Georgia’s aggressive plan to attempt to increase tourism to the area. Like the other modern buildings that Mestia has added in the last decade, they have used german architect Jurgen Mayer-Hermann’s architectural firm, which is named after himself. The building was constructed in an unbelievable 3 month period from October to December of 2010. The town of Mestia is generally known for their medieval buildings and their great skiing.

One thought on “Queen Tamar Airport”