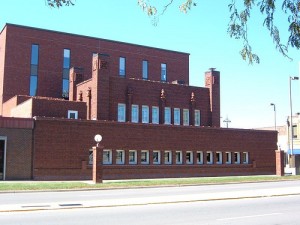 In 1911, Louis Sullivan designed the building for the People’s Savings Bank in Cedar Rapids, Iowa. The bank was renovated after World War II, including the addition of the larger secondary building; the interior of the building was later restored to its original condition. Today, it’s owned by Wells Fargo, although they share the building with an Italian restaurant. 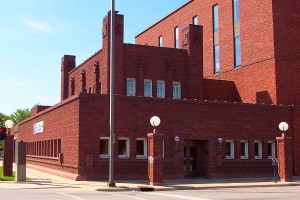 The exterior is all red brick ornamented with terra cotta, a characteristic style of Sullivan’s buildings. The building doesn’t have any slopes, arches, or curves, instead being delineated by right angles and some subtle decorations. The larger expansion, while it doesn’t look incongruous, nonetheless is obviously a separate section. The original building has the appearance of merely a front or introduction to the much larger, taller, rather blocky section behind. The second floor of the original building is smaller, and rises from the middle of the building along with four protruding pillars at each of its corners. 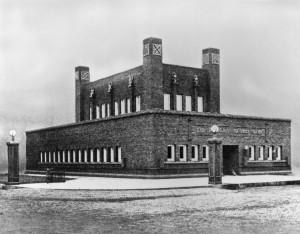 With the expansion, the building seems to have three heights: The two levels of the original, and the hulking addition behind. The three levels soften the impression of the building; although there are only right angles, it seems to rise slowly to its full height, rather than jumping from the sidewalk to the roof. As it was originally designed, the four projecting pillars made the building look stately, but with the larger section behind, I think they suggest the appearance of a temple. The windows are all recessed, and they’re taller than they are wide. The building now looks less personal and much larger than what Sullivan originally designed, but I don’t think the expansion spoiled the look of the building. 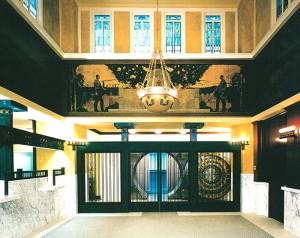