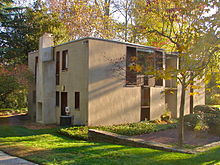 All the other posts regarding Louis Khan have been about his public structures, but his work with homes is equally as amazing. Although he only built nine houses, they are all studied in depth and regarded as exquisite pieces of architecture. The Margaret Esherick House is argued to be the most studied and highest caliber of those nine houses. Margaret Esherick commissioned Kahn to design the house in Philadelphia in 1959 and completed in 1961. The building won many awards and was listed in the Register of Historical Places for Philadelphia in 2009. This single-bedroom house may look simple from the outside, but the intricacy of geometry and, once again, natural lighting makes this another one of Kahn’s masterpieces. 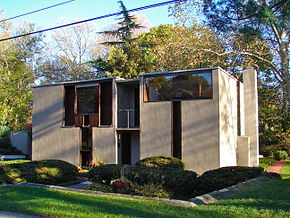 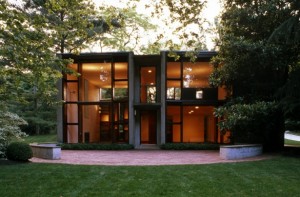 As can be seen above, the front and back of the house are completely different. While the front is constructed of concrete and stucco, the backside is almost entirely made of glass panels. The way Kahn constructed the building to use geometry and space to his advantage is impressive. The entirety of the house from the front door right is a massive living space, with the dining space and living space the two floors opposite it. He uses what he refers to as “servant spaces” to connect the areas, and the sharpness of how they connect is fascinating to me. In my life I have always appreciated order, and this house would be perfect for me. It fits together like a Tetris puzzle. The balconies above the front and back doors of the house provide not only a space to enjoy outside, but also a break in the facade of the house. Each side of the house also has its own window and shutter configuration. With these four different methods of letting light into the house, Kahn has once again shown his mastery of natural lighting. The walls are designed in a way that allows for both openness and privacy, as well as protection from weather and a welcoming of fresh air. 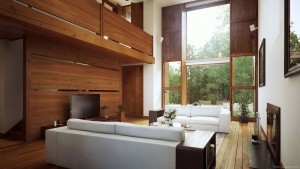 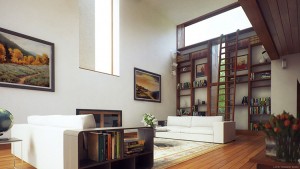 I may write this almost every post, but I love what Kahn is capable of doing when it comes to lighting. Artificial lighting is not pleasant or encouraging of happiness, so opening up homes to natural lighting is important to me.