Louis Kahn has done a lot of work on buildings that house art, but the Kimbell Art Museum in Fort Worth, Texas is argued to be one of the most notable pieces of architecture in recent times. Like the Church in Rochester, Kahn was up against many notable artists for the commission of this building. The founding director, Richard Brown, and Kahn had similar views on architecture, both agreeing that the buildings that house art should be works of art themselves. After being chosen, the director lined up a partnership with a local architectural/engineering firm so that the overages on cost and time that Kahn was known for could be avoided. Kahn was hired to begin construction in 1966 and the building opened six years later in 1972, with an expansion that went along the ideas of Kahn’s plans in 2006. 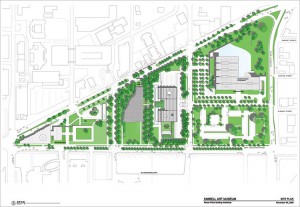 The complex is composed of sixteen vaults separated into three different groups. There are six 100 feet long and twenty feet wide vault to the north and six to the south, with the remaining four  in the center. The western most vault acts as a sort of porch, open to the west as an entryway leading from a courtyard. Each building is twenty feet high with an arch. Kahn was instructed to build no higher than forty feet so as not to block the view from the nearby Carter Museum. The vaults are constructed of folded concrete with light slots on the top. Kahn had to fight to keep the vaulted structure, as the firm he was working with feared it would make costs too high, but won out with this design because he was able to avoid costs of support columns with impeccable engineering of the roofs. This shape allowed the galleries to have a more inviting, “room-like” feel. 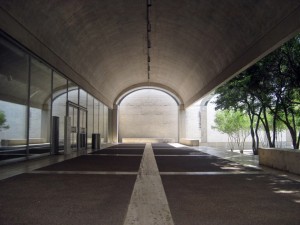 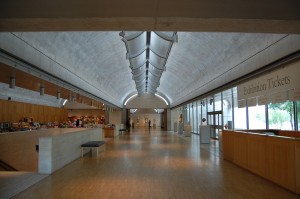 Again, my favorite thing about the architecture of Louis Kahn is his use of natural lighting. He constructed the building so the art would be exhibited on the second floor, allowing for more natural light to come through with the skylights in the ceiling, as well as building some sides entirely of glass for the same effect. Although Kahn was not alive at the time of the expansion being built in 2006, his ideas and notion that any expanding should be its own work were fought for by his daughter and eventually respected.