Although the first church built for this congregation was done by a phenomenal architect and significant to the community, Louis Kahn was chosen by the First Unitarian Church of Rochester to replace the building with his own design. The church hoped to give the community a “notable example of contemporary architecture”. Just as with the Yale Art Gallery, this church was a modern piece stuck in the middle of a not-so modern area. He was in competition with many other notable architects for this job, but won because the search committee liked his philosophical approach. After a couple designs, with help of the congregation and surveys they completed, Kahn designed a building that met overwhelming approval. 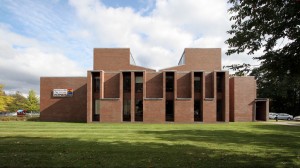 The coolest part about this building is how Kahn constructed it to direct light. The exterior is brick, with many windows folded into the bricks that have ” light hoods” to generally prevent direct sunlight from reaching the interior. These light hoods create shadows on the outside that make the building appear to have columns, and make the building appear taller than it actually is. Another prominent characteristic of the church is the four “light towers”, as Kahn named them, that create the look of a building within the building. The four light towers create another square on the roof, but inside the building it makes the sanctuary. They are called light towers because they are designed to bring natural light into the sanctuary in a specific manner. 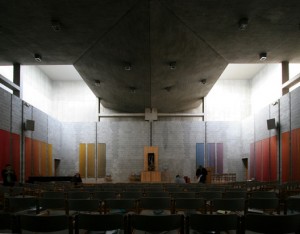 I picked this building because, while I’m not religious, the shape of this church really stood out to me. In contrast with grand buildings with spired towers protruding from multiple points and ornate crosses, this church was more subtle… As is popular with Kahn, and what makes me a fan of his work, is how he uses natural lighting to his, and the building dweller’s, advantage.