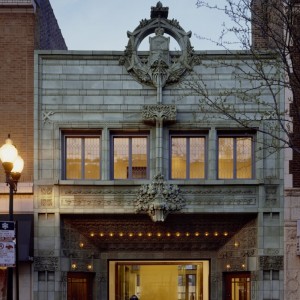 Like many famous artists, Sullivan enjoyed a time of prosperity and success before falling into financial difficulties, decline in business, and a collapsing personal life. He struggled with alcoholism and accumulated debt, while his style lost popularity. He designed his last building, the Krause Music Store, in 1921, less than three years before his death. William Krause commissioned William Presto to design a building for both his music shop and personal residence; Presto, a former employee of Sullivan’s, asked him to design the terra cotta façade on the building. 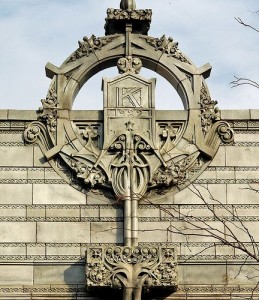 Sullivan gave the façade an organic, nature-inspired look. It’s laid out in rows of bricks, but it’s ornamented with curves and decorations. Unlike his other works that I’ve posted about, this is a very small, simple affair, and Sullivan wasn’t responsible for the design of the whole building. It has a very cozy, homely look; it’s welcoming and open. The large, rectangular arch that slopes inward to the entrance gives the shop an inviting appearance. 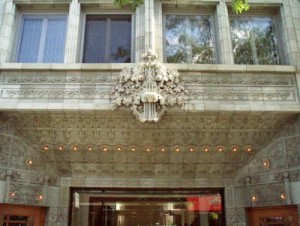 The building shows Sullivan’s firm belief that “form follows function”. It’s decorated tastefully, rather than overflowing with carvings. The ornaments that are there are richly detailed and are based around natural images of branches, vines, and leaves. He blends geometric figures such as hexagons and triangles with organic curves and leaves. The building was designed both to be a comfortable living space and a welcoming business space. 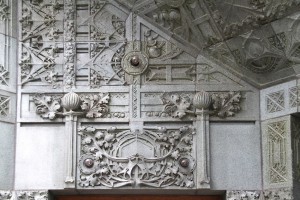 One thought on “Krause Music Store by Louis Sullivan”