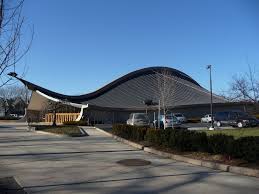 The Ingalls Ice Rink was built in 1958 and its design resembles that of the previously discussed TWA terminal. Another one of Saarinen’s sweeping designs is noted in the curvature of the roof which is known as the Yale whale- a play off of the fact that Saarinen graduated from Yale. The main structure is composed of solid concrete including the roof which is “hung” from a central point of cable net structures. This innovative architecture leads to the double curved look of the rink’s exterior.  The placement of cables serves to stabilize the extending curves in the face of winds. The center of the dome is only 75ft above the ice but the use of symmetrical slats along the curve of the dome makes it seem much larger. 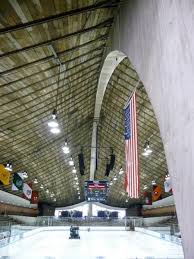 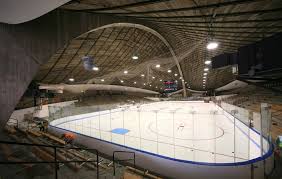 The rink is another one of Saarinen’s catenary projects as the dome resembles both the arch and the TWA terminal, a common theme found throughout Saarinen’s projects and designs. 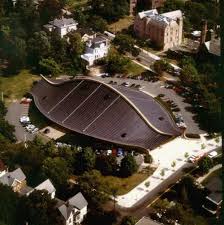 The beautiful structure was recognized, placing it on the list of America’s Favorite Architecture. Overall, this is another example of how a building that could have been a simple ice rink was turned into a whimsical piece of art by the infamous Saarinen.