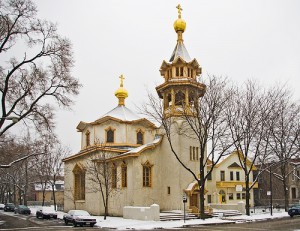 Historically, the Orthodox Church has not been a popular denomination in America and the Western world, instead being prominent in eastern Europe and Central Asia, notably in Russia. Around 1901, in Chicago, Orthodox immigrants from these areas commissioned Louis Sullivan to design an Orthodox church for their community. (Only in 1923 would it be promoted to a cathedral.) The building was designed in the style of Orthodox churches in the immigrants’ homelands.

The building is quietly beautiful. While the church is not small, it is not like some of Louis Sullivan’s other buildings, which were massive, towering affairs. It’s elegant and classy, with a tasteful white and gold exterior and a dark grey roof. The design is purposefully reminiscent of rural, Eurasian churches. The building looks like a cluster of structures, each with different roof heights, angles, and projections, but they fit together harmoniously. 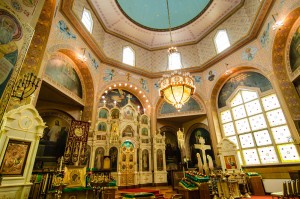 The interior is spacious and ornately decorated. Unlike traditional Protestant churches, which are often simple, functional buildings, the Orthodox tradition involves artful church buildings, overflowing interior artwork, and resplendent altarpieces. Today, it’s used as the cathedral church for the Diocese of the Midwest, and Liturgy services are still held there. I’m glad that the building is still in use; I think it’s good that churchgoers can experience the building’s beauty, rather than it merely being a landmark or attraction. 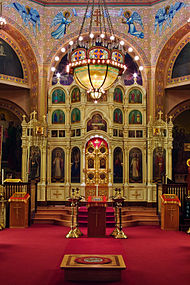