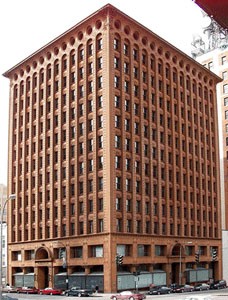 Now called the Prudential Building, the Guaranty Building was one of the first skyscrapers. It was designed by Sullivan and Adler and was built in the 1890s in Buffalo, New York. The Guaranty Building immediately recalls Sullivan’s earlier design of the Wainwright Building, which set the template for future skyscrapers. Sullivan believed that tall buildings should revel in their tallness, and accordingly, the building is completely vertical and rectangular; it rises from the sidewalk to the capital without sloping, and there are no curves or triangles in the design. He also held to the creed “form follows function”, so while the capital is ornately decorated, the shaft of the building is sharply delineated into a grid of windows and offices. 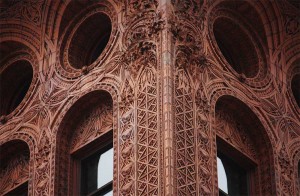 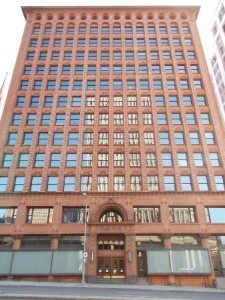 As with the Wainwright Building, the exterior of Guaranty Building is divided into three sections: The first two floors form a firm base and contain retail stores, the shaft of the building soars vertically upwards and houses offices, and the decorative capital crowns the structure. While both buildings have a similar red color, the exterior of the Guaranty Building is covered in red terra cotta tiles, rather than red brick. It’s also several floors taller. The building is more square horizontally, and the steel skeleton is more prominent in its design.