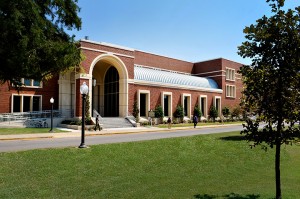 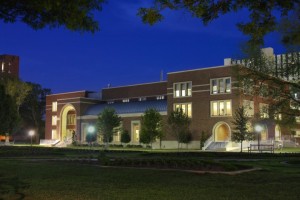 Gould Hall at the University of Oklahoma stands out to me because it is not like the other buildings. True it has the same color scheme, but it also has many differences. For instance, it has protruding, white window frames that are simple; even its pillars are simple and almost hidden. At first glance the building is not much to look at and doesn’t cry out for attention like the others. However, as I continue to observe the building its features become almost noble instead of simple. Its pillars are strong and smooth, but are not easily seen at first. I feel like these features may also describe what it is like to be an architect. It’s not the most glorified job, but its necessity is unquestioned and its role in our modern world has been undoubtedly established. These underlying concepts are the strong pillars that support the field of architecture just as the pillars were not placed outside of Gould Hall. As Gould Hall is designated to the college of architecture it makes sense that it would have these features.

One thought on “Gould Hall”