The Dulles International Airport is one Eero Saarinen’s most famous buildings. Located in Washington D.C., the design of this airport is considered one of the buildings that changed American architecture forever. 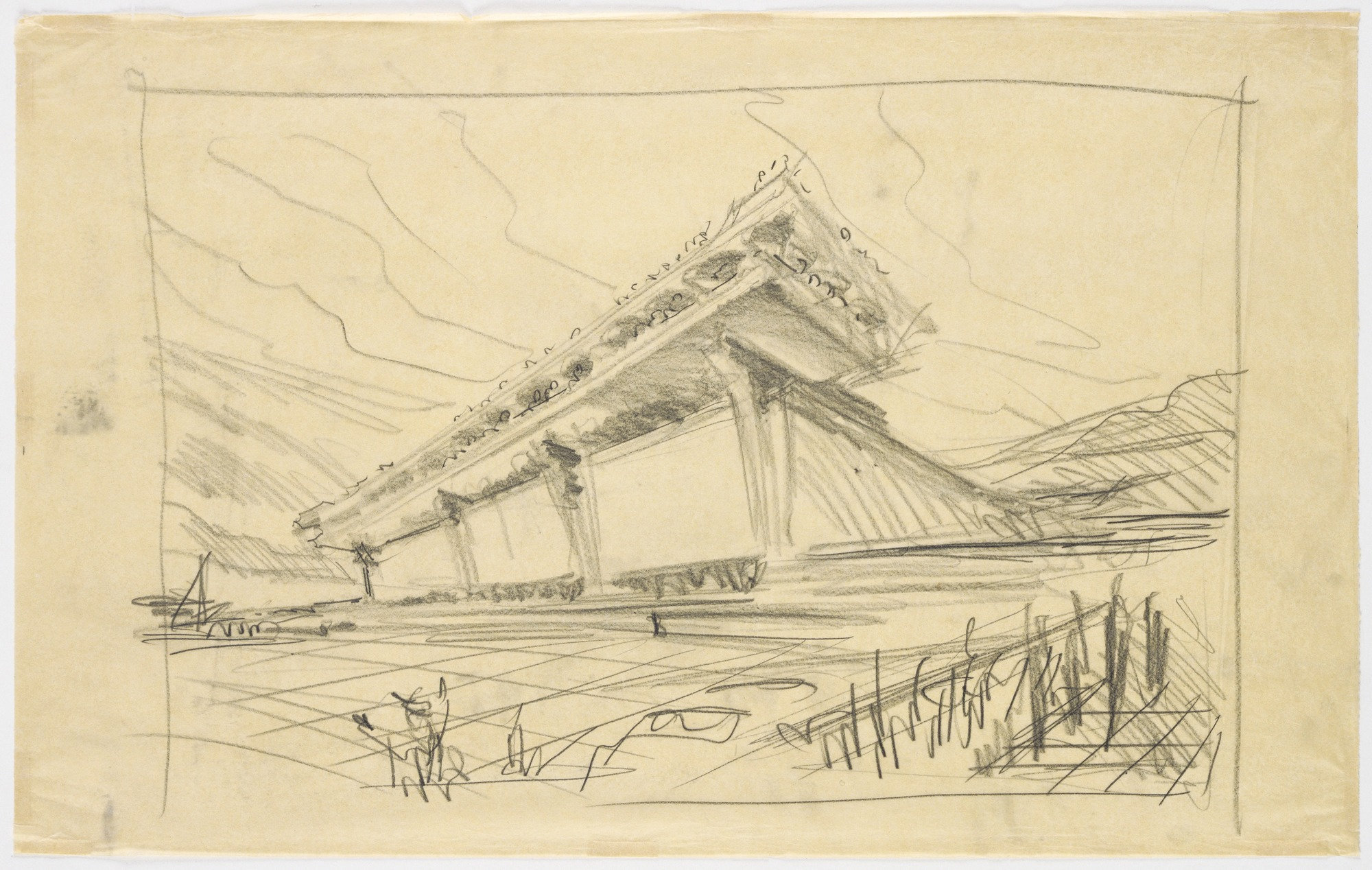 In this drawing for the terminal, the concrete roof slab and piers thrust upward as if to take flight. Saarinen had a dramatic difference in the size of the front of the slab and the back—which was supposed to give the sense of liftoff and speed. 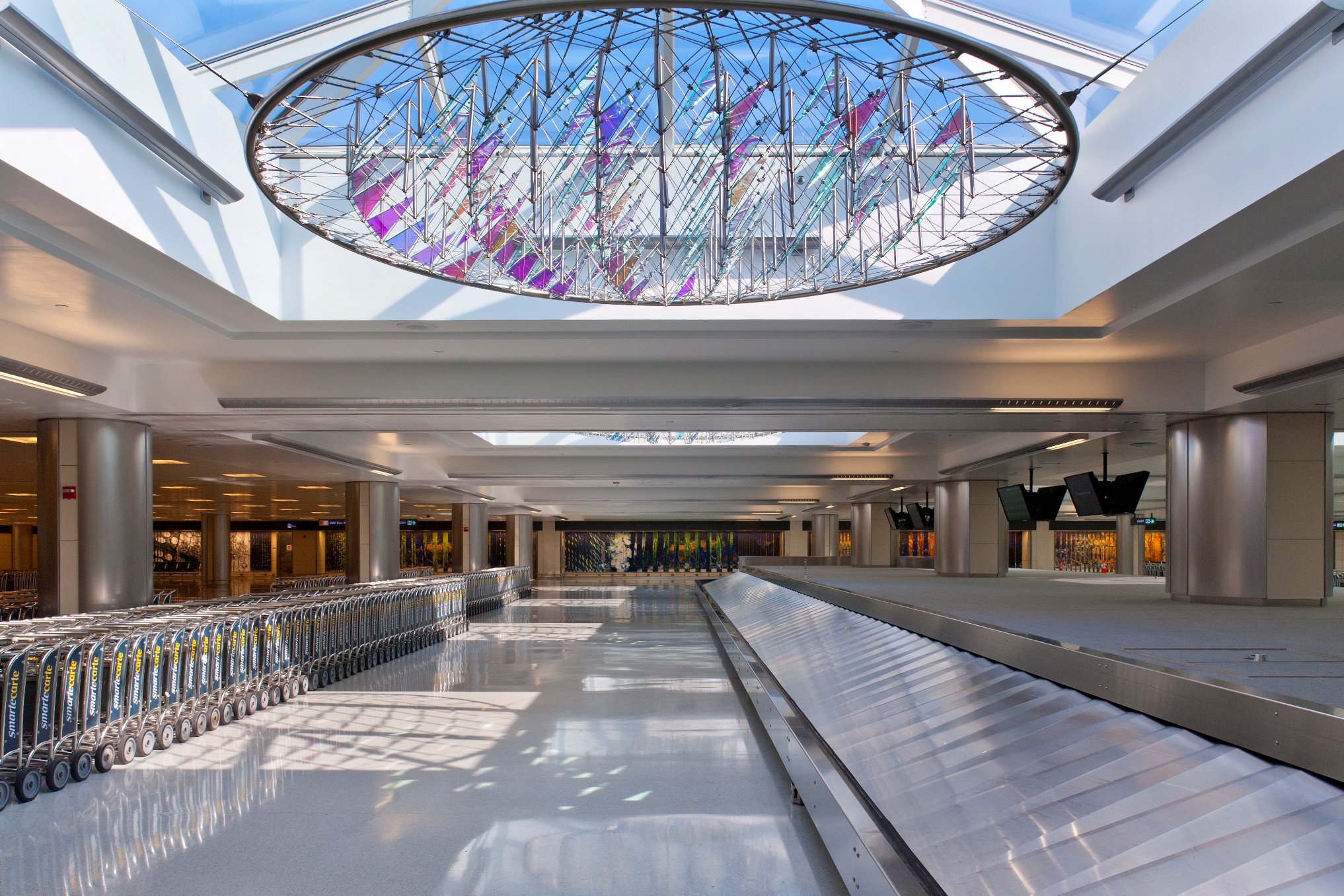 Eero Saarinen received commission for the main terminal of the Dulles International Airport in 1958 after the passing of the Washington Airport Act of 1950. Growth in aviation after WWII led to the passing of the act which stated support of a federally backed second airport in the Washington D.C. area. In 1958 President Eisenhower chose the location for the airport, which is about 30 miles outside central Washington D.C. in a town formally known as Willard. The airport is named after John Foster Dulles, who was Secretary of State under President Eisenhower.

“When faced with the challenge of designing the terminal’s entrance, he had to create an articulated entrance to stand out against the modern and repetitive structure. He also had the typical challenge of providing graceful access to the building, encountered by automobile, entered and further accessed by foot.” 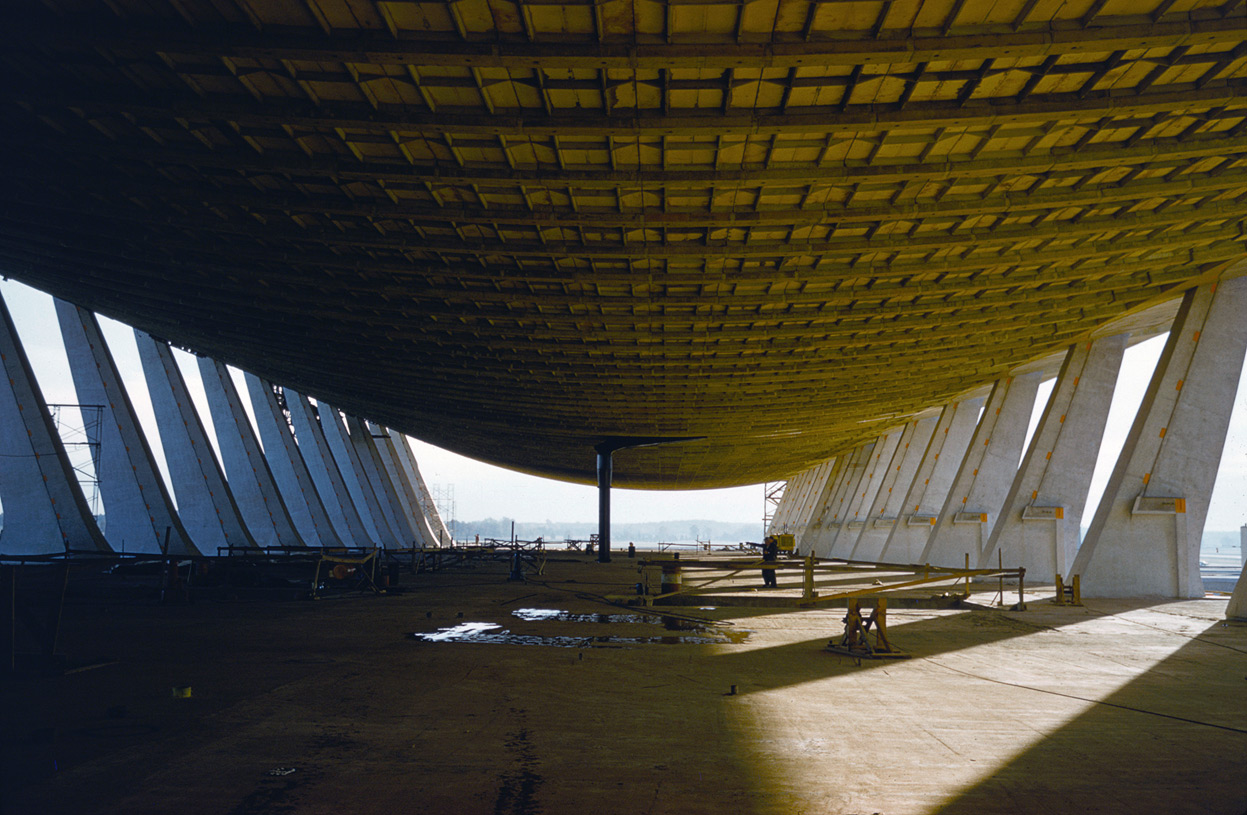 For this project, Eero Saarinen spent a lot of time studying and researching airports across the country, hoping to come up with a design that expressed flight and movement. This is where the idea for the simple, wing-like form of the roof came about. Though minimal, the terminal is considered most likely his best work. It is constructed of glass, steel, and concrete, with a “catenary curve roof” supported by cables. Saarinen wanted the Dulles International Airport Terminal to feel like a federal building in the nation’s capital and really wanted to incorporate the age of jet travel. (Dulles was the first commercial airport designed specifically for jet aircraft travel.) 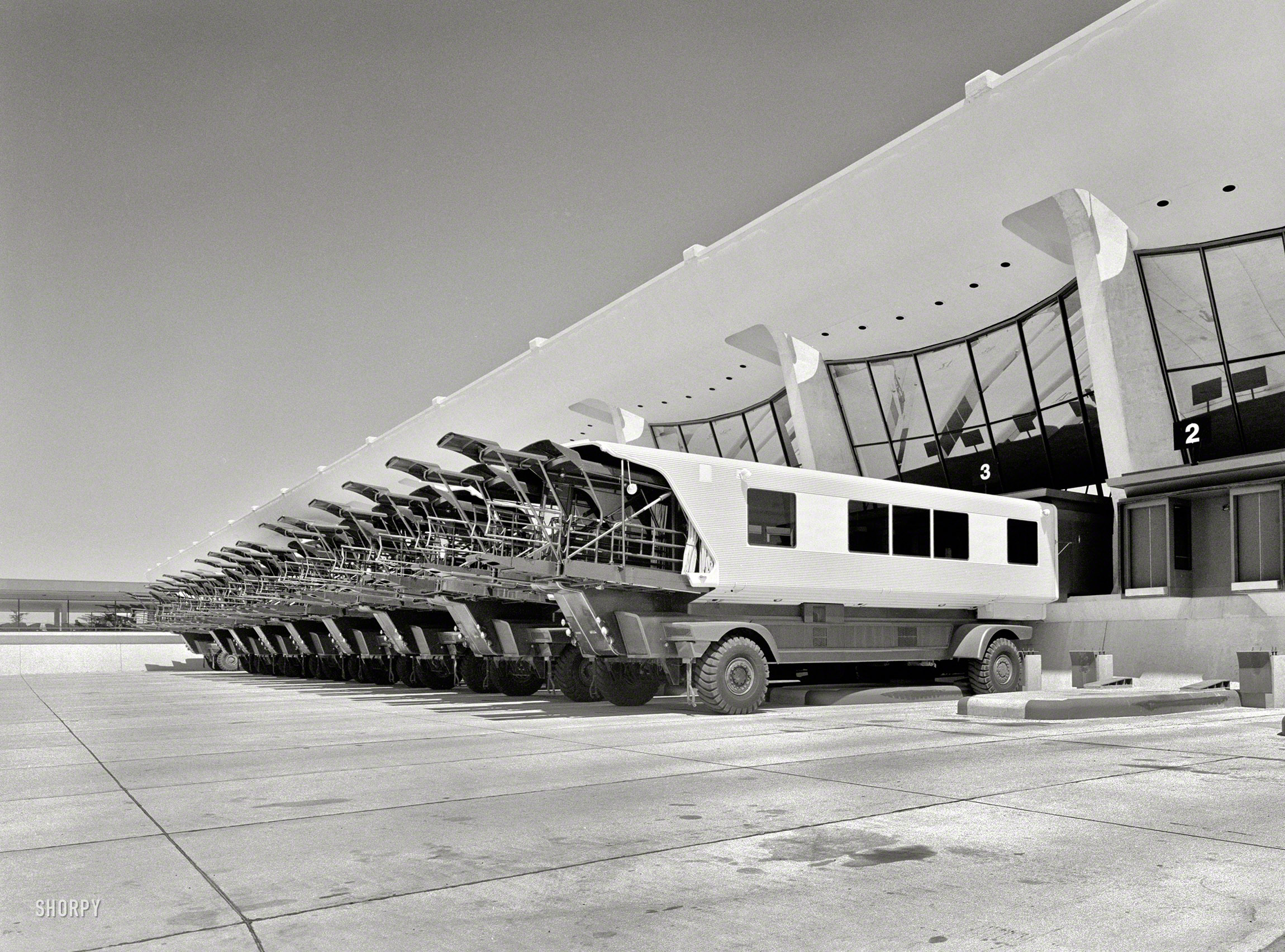 Saarinen also introduced mobile passenger lounges to the Dulles airport in order to reduce distances that passengers had to walk due to the large size of the terminal which was 600 feet long. The mobile passenger lounges were motorized departure lounges on wheels that would detach from the terminal and transport travelers to their aircraft, they resembled a sort of giant luxury bus and carried up to ninety people from the terminal to their plane.These obviously no longer exist because of underground shuttles, but at the time was one of Saarinen’s biggest innovations. 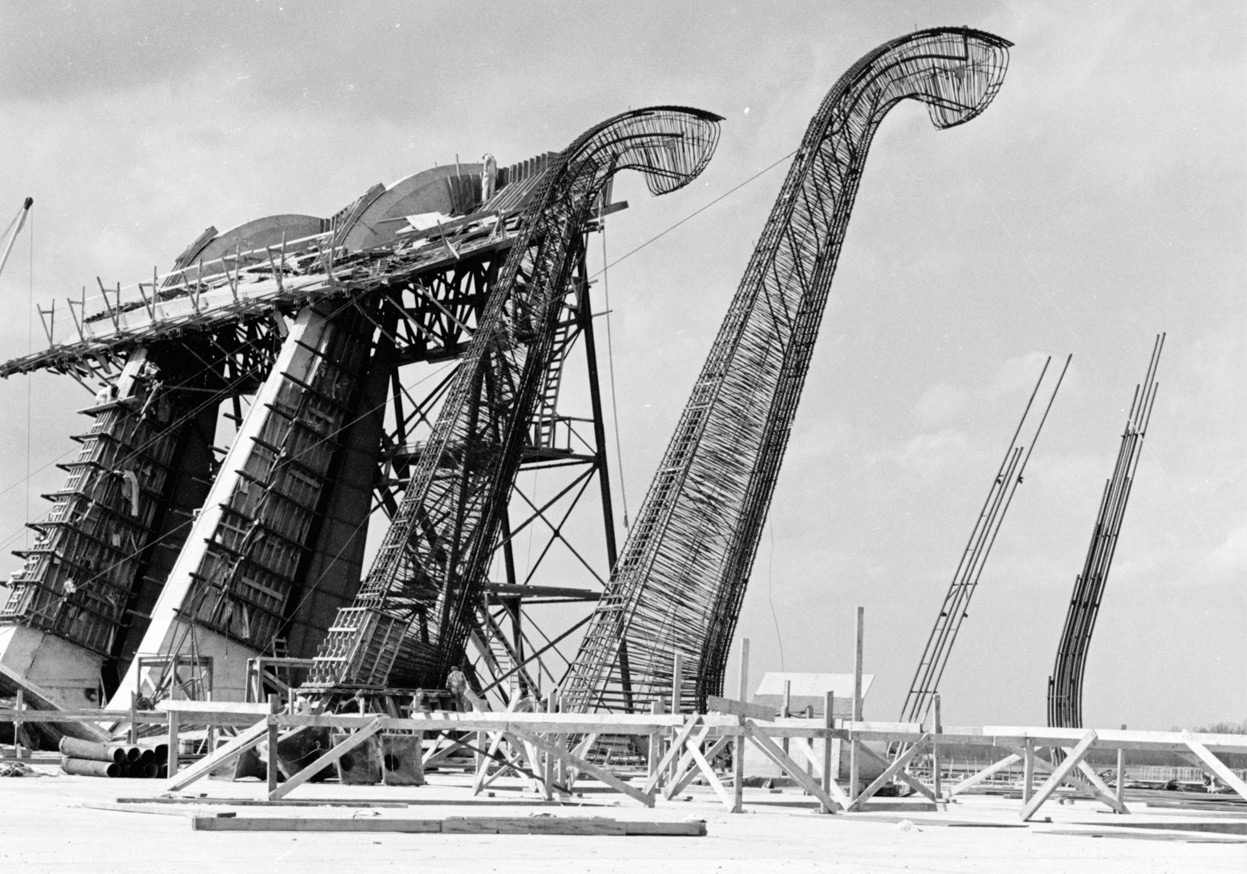 Unfortunately, Saarinen did not live to see its completion in 1962. He died of a brain tumor at age 51 in 1961. But his design for Dulles influenced a mid-century wave of sensual, expressive modern forms. Including the original terminal at Taiwan Taoyuan International Airport in Taipei, Taiwan which was modeled after the  terminal Saarinen designed for the Dulles airport.