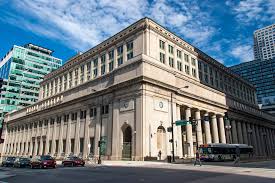 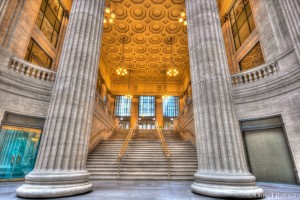 One of the building that has influenced me in a positive way is the Chicago Union Train Station in Chicago Illinois. I chose this building because it’s where I rode on a train for the first time. I went with my grandparents, who were attending a conference.  I was extremely excited when I saw it because I had never seen so many tall columns and such a beautiful marble floor. I felt like I was on adventure, mainly because I was only 8 at the time, but I know that the design of the building greatly helped emphasize the feeling. What affected me the most about the building was the row of columns on the outside and inside. I had never seen so many columns up close before and the ceiling lights only made everything more stunning. The building seemed very important to me because I thought, at the time, columns were reserved only for important buildings. The Union station itself represents order while capturing the imagination.