Last year, as a freshman, I wanted to try out something fun, and I also wanted to not get fat, so I decided to join the rowing team. There aren’t actually any rivers in Norman, so for practice, we would drive to Oklahoma City and row on the Oklahoma River. We used Chesapeake Boathouse. 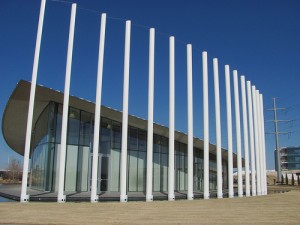 The outside of the building has a sweeping shape; there’s an overhang over a patio, which is lined by a moat and tall, freestanding pillars. The way that the roof sweeps, curves, and terminates at point gives an impression of elegance and cleanness, which fits with the white color scheme and the floor-to-ceiling windows. Inside the building is a hangar-like boat bay with racks of boats and various multipurpose rooms with high ceilings.

The boathouse was built mostly using money from Chesapeake Energy Corporation, and it’s right next to the equally sweeping, modern, white Devon Energy Boathouse. It has a classy, futuristic look because these petroleum companies are working on improving their image; the boathouses are built on a part of the river which wasn’t really in a nice part of the city. On the one hand, that’s nice of them, and I’m glad that they’re making improvements to the city. On the other hand, it means that we rowed on the river past sewage dumps, so there were certain sections that smelled just awful.

However, the facility itself was very nice. Since it’s an athletic facility, I appreciate the clean, voluminous look. Most of the time I spent at the building was in the very early morning, often before sunrise, so it was good to gradually wake up in the cool, clean atmosphere. Rowing is an especially painful, difficult sport, and the calm, elegant décor was relaxing.