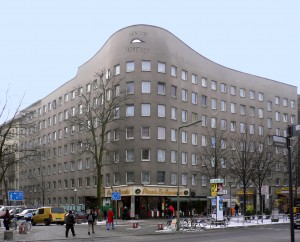 The city of Berlin was left in shambles after the air raids of World War II. An urban renewal project called the International Building Exhibition Berlin was devised in the 1980’s to rebuild parts of the city that had been destroyed. The apartment building, Wohnhaus Schlesisches Tor, was Álvaro Siza Vieira’s contribution to this revitalization movement, and also his first work outside of his country. The building is commonly known as Bonjour Tristesse (French for “Hello Sadness”) due to graffiti marking the top front of the building. Bonjour Tristesse was not the first re-build in its location after the war’s destruction. First there were some small store fronts which did not fit in well with the surrounding architecture, nor did they provide any desperately needed housing. The store fronts were removed for Siza, whose design featured store fronts on the ground level and social housing above. When I first looked at this building, the curved facade immediately reminded me of Antoni Gaudí’s work, such as his Casa Milà (popularly known as La Pedrera), an apartment building he designed in Spain. It makes me wonder, to what extent did the work of Gaudí, a man who was from Spain, influence the work and education of Siza, who was from Portugal? Surely every architect knows Gaudí well.

The image below shows the small store fronts which did not match the architecture of their surroundings. 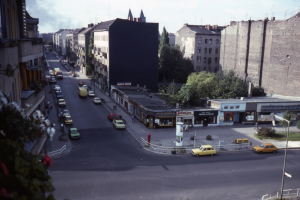 Information and images credited to this article: http://www.archdaily.com/519337/ad-classics-wohnhaus-schlesisches-tor-bonjour-tristesse-alvaro-siza-vieira-peter-brinkert