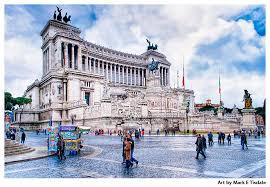 This monument started in 1885 by Giuseppe Sacconi and was completed in 1925. It was built in honor of Vittorio Emanuele who was the first unified king of Italy. This building is not without controversy as to the design and resources that were used to build it. Its “corpse white marble stands out in Rome and only comparable to that of the Vatican. Which was done on purpose as the statue of Vittorio Emanuele stands defiantly towards the Vatican.

When I first saw this building I was stunned by how white and new it looked. It is giant and just like many buildings in Rome, it makes itself know by its uniqueness. I remember thinking that if this building was recently completed then we in America can still make huge, powerful and beautiful moments to this day too. This building as well as many other Italian building inspired me and filled me with awe. It is quite amazing what humans can build.