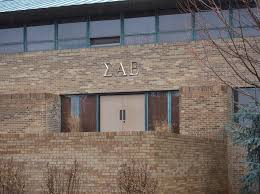 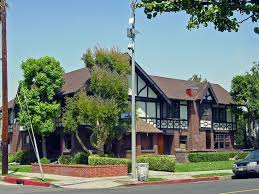 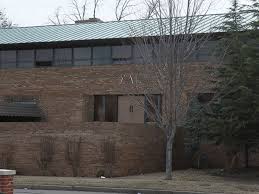 Details of this building’s construction are drowned in public media by an event that occurred about a year ago. The house was shut down and all 68 fraternity members were kicked out because of a leaked video of the fraternity performing acts of racism. Shortly after the closing of the house, frat members orchestrated a protest in front of the house, resulting in the expulsion of two students for the rallying of a racist assembly.

The closed building is now planning to be used, ironically, by The Southwest Center for Human Relations, as well as by the disability testing center.

The building was originally designed to house students, and now will be transformed into an office-like setting, a change not supported by the building’s design. This is a perfect example of the problems arising from a building being adopted by people using it for other than its intended purposes.

Let this building be a warning that the ultimate fate of our architecture depends on the actions of the people who occupy it. 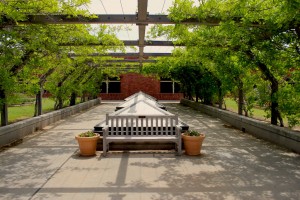 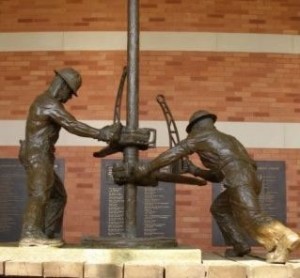 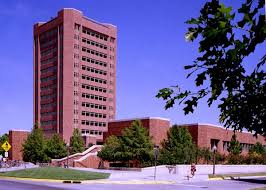 Starkey’s Energy center, on the Northeast side of The University of Oklahoma Norman Campus, started construction in November of 1990 and was finished in late 1991. 50 million dollars of construction funds were gathered through Petroleum company grants, government loans,  and individual donations. Topping at 15 stories, it is the largest and tallest building on the OU campus.

Not only soaring to new heights, the lobby of this building descends into two bastment floors. Level 2, called the ground level, holds the Lawrence S. Youngblood energy library. And though I could not find a picture online, I would like to describe the view of the two basement floors from a glass window of a lobby. From the basement floors, you are completely visibl by the lobby floor, but from the lobby, you cannot see nor can you be seen by any floor above you. So, while on the outside, the building celebrates its ascension, on the inside, it celebrates its depth. 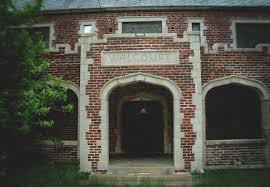 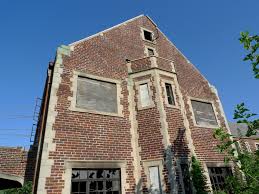 The Walcourt Apartments were built in 1910 by architect Joe Davis, in a time of economic prosperity, hired by the developer H.E. Mussen with the instructions to build a building unlike anything built before. It was opened in 1928. Mussen boasted of the meticulous attention to detail in this jacobean revival style building, bragging that, “no two angles of the Walcourt are similar.”  Mussen’s dream was a confirmed to be a success, as in 1928 the Walcourt was added to the national register of historical places, described as “architecturally interesting.”

Despite its booming success, the building did not become immortal. It was damaged by weather’s natural wear and tear over the years, and now it is boarded up and equipped with signs against trespassing. There is no telling how long this building, though out of commission, will be allowed to stay standing, but it exists now as a reminder of the limits placed by time upon human construction. 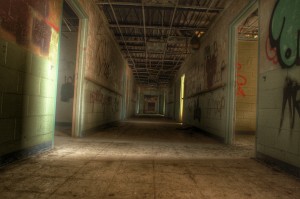 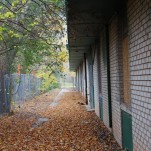 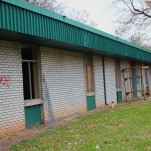 Cottonwood Manor, built in the 1950’s, has a reputation as creepy as its design. It operated as a mental hospital, however, a lack of testing for tuberculosis caused it to be shut down in 2001. Abandoned, a minister claimed that he would make this building into the “New Revival Church,” but the resurrection never came. Now, because of cases of trespassing and vandalizing, it has been border off from the public.

There is discussion that this building is haunted, and people often illegally enter its premises in order to have supernatural experiences. The monotony of the outside of the building seems to mast the terror incited from the inside hallways, like something from out of a scary movie. Whether haunted or not, the building its history, and the people who found refuge in it, should not be erased from our memories. 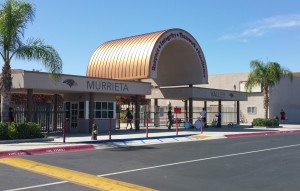 I chose to write about this architectural sight because it is the high school that I attended. In 1990, it opened up as Murrieta, California’s first four year high school.

To start, we can look at the front gate of the school, pictured here. The arch on top serves no particular structural purpose other than to display the school’s motto and to be walked under. As the first high school built in the city, this is a perfect example of architectural flaunting.

Another of these acts of architectural flaunting is a bit more nonsensical, and not shown in an image (unfortunately, I could not find many pictures online). One of the quads, an awning beneath which tables sit for lunch time, is called the wave. Imagine the arch shown in the picture’s peak shrinking to about half its size and its length doubled, and then that parabola shape reversed and repeated to create a wave-like shape. Each piece of the awning consisted of one full wave cycle, with a top and bottom peak, and each resting atop another piece. Why I call this an architectural flaunting is because there were many holes in the awning to mimic the design of the table, which meant that the wave did not provide shade, nor did it provide shelter from rain. Thus, it purely existed for the beauty of its architectural design, and not for any other particular purpose.

These two structures show how Murrieta Valley High School expressed its prestige as the first high school in the city through acts of architectural flaunting. 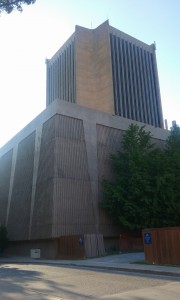 The building that I chose for my sixth blog is the Physical Sciences Center at OU. My first impression of this building was when I was looking around campus for the first time. My first thought was that it would be a good landmark to look for if I ever got lost, because it looks so different than the other buildings on campus. Although not pretty because it lacks color and windows, I like that its ugliness serves a purpose – a safe haven in case of riots. The idea of having a safe haven on campus is comforting. However, looking at it reminds me of something ominous looming on the horizon, and the inside is not much better. The lower floors are dark, letting off a depressing feeling due to the lack of sunlight coming in. The lower entrance is also poorly designed, having doors at the bottom of a slope such that the lowest floor and the even lower classrooms flood when it rains. The interior tile and stairwells are not very well kept up and lend themselves to an unsettling atmosphere in general. 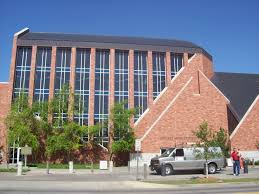 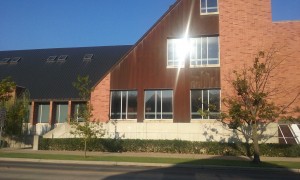 The fifth building that I chose is Catlett Music Center at OU, which I first encountered when walking around the art side of campus looking at the sculptures and other decorations outside. The exterior of the building is not appealing to me, as it looks like a jumble of different things that would be decorative alone thrown together into an unappealing collage. For instance, one section of the building has wood paneling that does not go well with the red brick, while similar sections of the building have none.  It also has blue and green stained glass windows, which would be nice if they weren’t in colors that don’t go well with each other or with the surrounding brick. The stained glass windows would also be much more aesthetically pleasing if they were not structured in ordered rectangular shapes on a square wall. Additionally, the presence of the triangular walls blocking the view of the main building seems unnecessary, as I cannot tell from the exterior that the walls serve any purpose. In all, the building evokes for me feelings of confusion and then disgust the longer I look at it each time I walk or drive by. 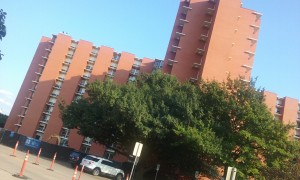 The fourth building that I chose to write about is Walker Tower, one of three towers that serve as residence halls at OU. I chose Walker specifically because of its special significance to me, as the place where I lived during my first year away from home. When I first saw the tower I was overwhelmed by the number of people that it housed, and unsure I liked the top-view cross shape of the building. However, the inside won me over. There are a variety of places to sit, and the space is utilized very effectively. The cross shape and large windows also means that all of the rooms have an excellent view, making them seem larger than they actually are. As far as dormitories go, the layout of the towers makes them very liveable for the amount of space available. 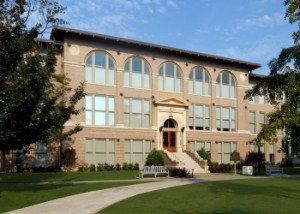 The building that I chose for my third blog is the Beatrice Carr Wallace Old Science Hall on campus. I encountered this building while on a run around campus and was instantly drawn to stop and look at it. It has large windows that are arched on the top level, and is made of a single, neutral light brown-colored brick. I appreciated the simplicity of the 6-pointed star decorations that add an artistic touch but don’t cause the building to appear overdecorated. I also really liked the simplicity of the front staircase, paired with an elegant stone railing, which leads up to a door that is arched to match the upper level windows. Overall, this building has a calming color scheme and an artful simplicity, a refreshing change by comparison to some of the richly ornamented red brick buildings at OU.

The second building that I chose to blog on is Carson Engineering Center, located on the engineering quad on the northeast portion of campus. My first reaction to seeing the outside of the building on a campus tour was to be impressed with the unique beauty of it by comparison with the other buildings on campus. I enjoyed the look of the symmetry with two sets of tiered staircases on either side of each exterior door, and the white overhangs over the doors and upper floor windows. I was drawn to the combination of the red brick with the white trim, and was impressed with the long narrow windows on the upper floors. After going inside on the first day of classes, however, I was no longer so impressed. The lower floor hallways are dark and feel crowded when lined with students waiting for class. This is paired with chalkboards at the end of long, pinched classrooms so that it would be hard to hear all but the loudest professors in the back of the room. Although nice to look at on the outside, this building does not use space efficiently inside and is not a building that I look forward to spending time in.