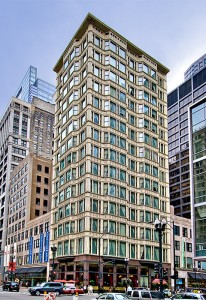 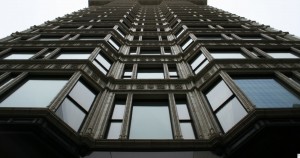 The Reliance building is a skyscraper located at 1 W. Washington Street in the Loop community area of Chicago, Illinois. The Burnham and Root architectural firm designed this building. Since Root died due to pneumonia while constructing the building, the rest of the building except for was not able to be found. At that time, Daniel H. Burnham recruited Boston architect Charles B. Atwood to finish the building. This building is characterized with large plate glass windows. They used white glazed architectural terra-cotta cladding, a feature that would later become strongly associated with him following his works for the World’s Columbian Exposition in 1893. At that time, it was believed to never need cleaning because its smooth surface would allow any dirt to wash away in the rain. The remaining top ten floors were completed with steel framing techniques. In its first few decades, the Reliance building was the first building that provided office space for merchants. On top of this, the Reliance building was one of the first skyscrapers to offer electricity and phone service in all of its offices. However, the Reliance building struggled to maintain full occupancy after Great Depression. Although it was recognized as a National Historic Landmark in 1976, it continued to deteriorate until the city of Chicago purchased the building in 1994. At that year, the renovation of the building’s exterior began; the damaged terra-cotta and all of the windows were replaced. The building was then sold to a private developer who renovated the interior which created the boutique Hotel Burnham. 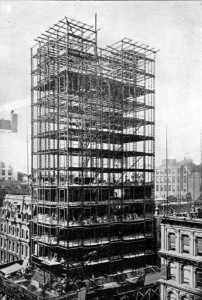 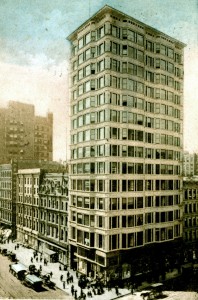 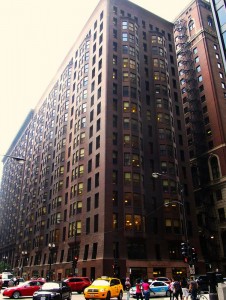 My fifth blog about Daniel H. Burnham’s work is about the Monadnock building. The Monadnock building is skyscraper located at West Jackson Boulevard in the South loop area of Chicago, Illinois. The architecture firm of Burnham & Root built this building in 1891. The north half of the building was built by Burnham & Root firm. The north half was called a fountainhead of modern architecture because its total absence of exterior ornament.  When this building was built, many people criticized because this building is too extreme and lacking in design. Brick was used to construct the north half of the building and the first portal system of wind bracing was employed in America. The wind bracing method is diagonal brace to tie the rafters of a roof together and prevent racking. The south half of the building was built the same way but is supported entirely by a steel frame. Today, this is called “curtain wall”

construction the facade doesn’t support the building, it’s just a “curtain” to keep out the elements. Even though the design is simple the Monadnock marks a historic transition in the development of structural methods. 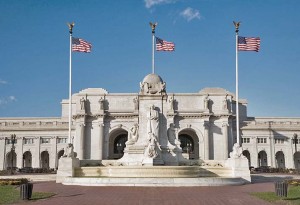 My fourth blog about Daniel H. Burnham’s work is Union station located in 50 Massachusetts Avenue NE Washington, DC.  This union station was constructed in 1907 and is considered to be one of the finest examples of the Beaux-Arts style of architecture with its 96-foot barrel vaulted ceilings, stone inscriptions and expensive materials such as white granite, marble, and gold leaf. Also, it serves as a big shopping center, the Union station is the most visited destination in Washington, DC. In terms of architectural techniques, classical elements included the Arch of Constantine which is exterior, the main facade. The Arch of Constantine was entitled “The Progress of Railroading” and their iconography expresses the confident enthusiasm of the American Renaissance movement: Prometheus (for Fire), Thales (for Electricity), Themis (for Freedom and Justice), Apollo (for Imagination and Inspiration), Ceres (for Agriculture) and Archimedes (for Mechanics). Baths of Diocletian which is an interior was built by expensive materials such as marble, gold leaf, and white granite from a previously unused quarry. While I was researching about the Union station, the interior attracted me because it didn’t seem like a station. Even though it was built a century ago, it looks still fancy. 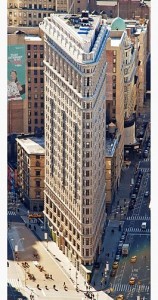 Flatiron building was first known as Fuller building is designed by Daniel H. Burnham and it is located at 175 Fifth Avenue in the borough of Manhattan, New York City. Flatiron building was designated as a landmark of New York City. When this building was designed and built, it was an innovative skyscraper because it was the tallest triangular shaped 22 story steel framed. Since this building has three edges, the name “Flatiron” is derived from its resemblance to a cast- iron clothes iron. When this building was constructed, a nickname was given “Burnham’s Folly” because many people at that time thought this building is not able to withstand strong winds. There were even people who speculated how far the building’s debris would spread after falling over. However, Burnham was an experienced architect so it didn’t happen. However, the down-draught effect caused the wind to increase their speed at the foot of the flatiron which lifted women’s skirts. 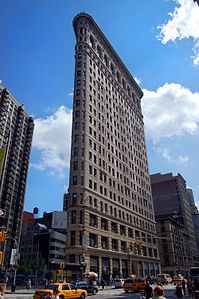 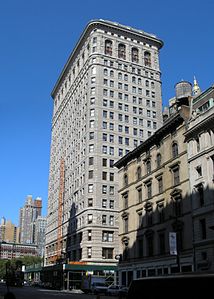 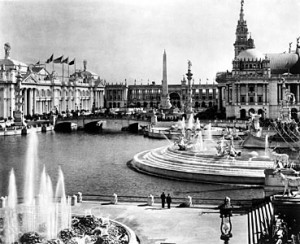 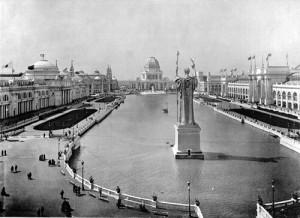 Burnham was credited for his leadership skills when he was in charge of undertaking the director position at the World’s Columbian Exposition which was held in Chicago in 1893 for the celebration of the 400th anniversary of Christopher Columbus’s arrival in the New World in 1492. The large water pool symbolizes the long voyage Columbus took to the New World. Through this fair, Burnham has achieved his old prototype about the city. He wanted cities to be beautiful and the landscapes to be planned cohesively. He used  neoclassical architecture style; design of architecture should be based on symmetry, balance, and splendor. Based on the neoclassical architecture style, a mixture of plaster, cement, and jute fiber which was called staff, was used to cover the facades which painted the building white. Because of this, Burnham nicknamed this city as “White City.”  A different introduction of architectural method gave a good impression to visitors and this fair was proved to be a turning point for the development of the modern American City and for Burnham as well. 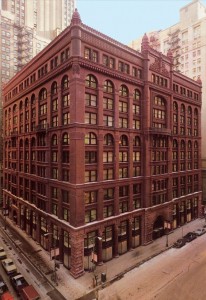 The Rookery building is a historic landmark which is located at 209 South LaSalle Street of Chicago, Illinois. This building was built by the architectural partnership of Daniel H. Burnham and John Wellborn Root in 1887-1888. The exterior of the building contains decorative elements reminiscent of late Roman, Venetian, Moorish, and Medieval European architecture. There are horizontal bands across the Adams and LaSalle facades (ornamentation) which attracts eye side to side to reduce the height of the building. They also used masonary load-bearing wall and a skeleton frame (a rigid of vertical steel columns and horizontal steel beams) in its construction. To be specific, the embedment of iron rails in a concrete foundation supports the two load-bearing walls and the immense width of the building. On top of the exterior, the interior of the building makes the Rookery more attractive. The ceiling is made by glass and it rises two stories. A number of lights illuminates the building and the lobby serves as the focal point for the entire building. Surprising thing is that t  he Rookery building was featured in the film Home Alone 2: Lost in New York. The exterior and the lower level of the building were filmed as the toy store Duncan’s Toy Chest. 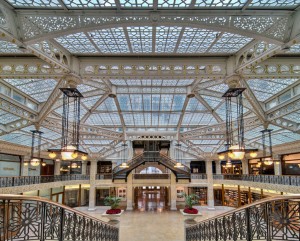 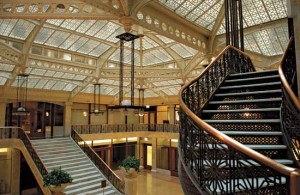 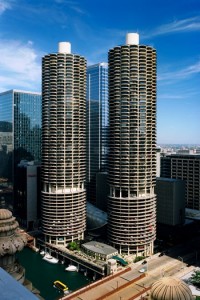 My last architecture for my blog is Marina city located in Chicago. The marina city was designed by architect Bertrand Goldberg  and completed in 1964. This architecture was the worst building that I have ever seen. When I first saw this building, I thought it looks like two corns are standing. It is a complex of residential and parking lots. The reason why this is my worst building is that it looks unstable. I can see all parked cars because of an opened building structure which also makes building ugly. The external color of building is gray which is a dull color. Even though it can be looked cute corns at night, it is so ugly when you see this in the daytime. 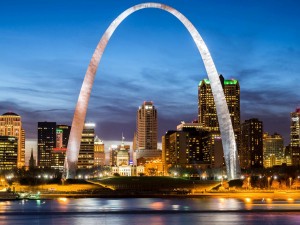 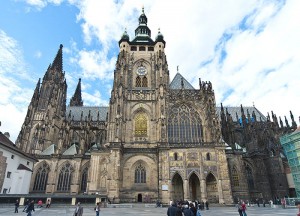 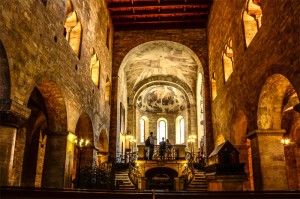 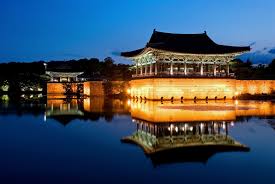 My third architecture is Gyeonju Donggung Palace and Wolji pond which are located in South Korea. These were the secondary palace site which was used for the palace of the Crown Price along with other subsidiary buildings and it also was the banquet room for important national event and important visitors. This palace is surrounded by artificially made pond. The first reason why I chose Gyeonju Donggung Palace and Wolji is that this architecture shows our nationality; a shape of building, roof, and formation. Since this represents national characteristics, a lot of tourists visit here. On top of this, I usually visit here whenever I want to take a rest. The light from the building and atmosphere make me relieved especially during the night. Whenever I remind this place and building, it arouses good memories during summer.