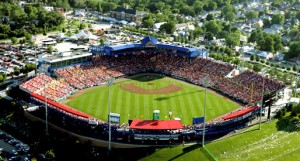 Memorial Stadium, built in 1949, and 15 years later renamed to Rosenblatt Stadium, was home to both the College World Series and minor league professional baseball games. It also shared a parking lot with one of the nation’s nicest zoos, the Henry Doorly Zoo (probably coming in another blog).

“The Blatt” as it was lovingly referred to was a colorful haven for America’s pastime, with burger joints like the famous Zesto’s and King Kong nearby, and tons of parking lot for tailgating and game day fun. Its location in Omaha, Nebraska made it the perfect place to house the College World Series, where teams compete for weeks in seven game series’.

Eventually, the stadium couldn’t keep up with the size of crowds that wanted to see the games, and much of the building was old and outdated, so in the mid 2000s a new stadium in Omaha underwent construction. In 2010, Rosenblatt was closed down and TD Ameritrade park opened. Then, in 2012 it was torn down. 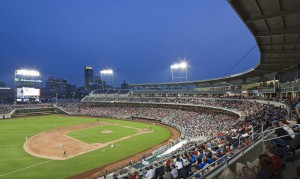 Today, where Rosenblatt used to be located, there is an homage to the old stadium. There is a small whiffle ball park that has the old sign from Rosenblatt and some of the original primary colored bleachers. 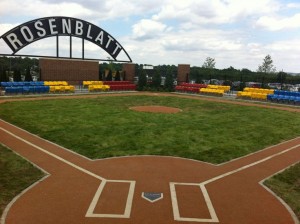 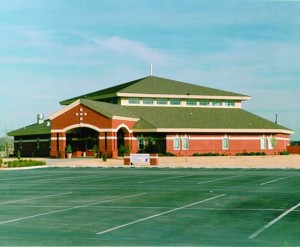 Saint Mark the Evangelist Catholic Church is located at 3939 W Tecumseh Rd in Norman, just past the interstate. It is also the place where I spent every Sunday morning of my childhood. The current building is a combination of the two pictures, with about 37,000 square feet of space. The first picture  was the original mass hall, which is around  6,000 square feet, and around 2000 they added on a massive new wing that about tripled the amount of seating available. The first wing was renamed “Founder’s Hall” and this is where they hold youth group and have various luncheons, wedding receptions etc.

With the add on of the western wing of the building, they were able to make the church a beautiful landmark in Norman. The hall has high vaulted ceilings that go up to a second tier with more windows directly above the altar, and stained glass windows are in the four corners, each depicting a different story from the Bible. The holy water font at the front of the hall is massive, with one large dish continually being filled and the water spilling into a large bath with a gate for baptisms, and two smaller bowls on either side.

The church really is beautiful and deserves a visit from anyone, the doors are always open!