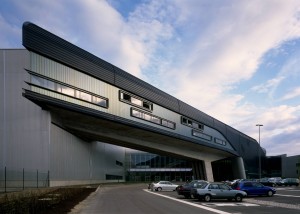 Zaha Hadid and BMW came together to work on this building and their goal was to deliver a radical reinterpretation of the traditional office. The Central Building acts as a transition zone between the manufacturing areas and public spaces, at the manufacturing center in Leipzig, Germany. Inside, many of the walls are glass, which helps to integrate the different employees, and prevent the establishment of cliques among blue collar and white collar employees. 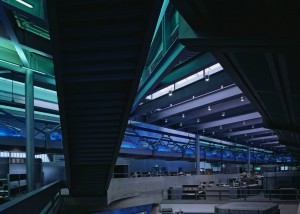 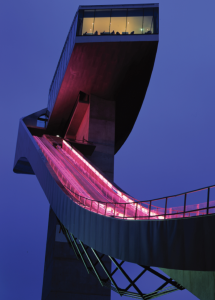 In 1999, Zaha Hadid and colleagues won an international contest to design a new ski jump, and in 2002, their winning design was opened up on the Bergisel Mountain in Innsbruck, Austria. The jump contains the ramp and facilities in the tower, including a cafe and viewing terraces. The tower extends about 50 meters above the peak of the mountain, with elevators taking people to the top, to enjoy the mountains and watch ski jumpers take on the ramp. 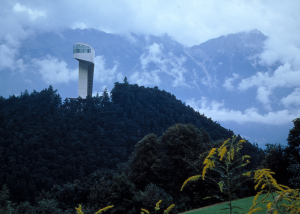 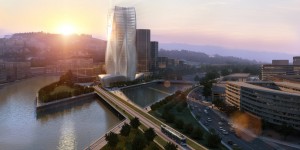 The future headquarters for the Bilbao Bizkaia Kutxa, a savings bank in Spain, is sited on the south-eastern point of the Zorrotzaurre peninsula in Bilbao, Spain, with spectacular views of the river and the rest of the city. The form is defined by two star shapes that are at 45 degree angles from one another at the top and bottom, but merge into one another in the middle, giving the tower a spiraling look that has a different profile depending on the angle you are viewing it from.  It will house 25,000 sq. m. total, 11,855 in the tower, 6,145 in the podium, and 10,234 underground. The primary structure is given by an exo-skeleton, and this is supported by the support system for the facade’s substructure, eliminating the need for interior columns. 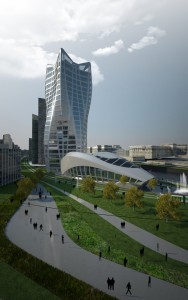 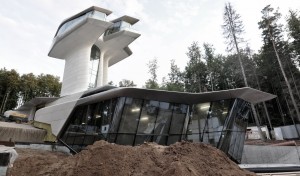 This house, designed by Zaha Hadid and her associates, is currently under construction in Moscow, Russia. The bottom of the house is build to merge into the hillside, with a tower over the middle, giving views of the Barvikha Forest. It is designed to have four levels, the lower level being the leisure area with living room, sauna, massage, and workout rooms as well as bathing areas. Above that is the main living and dining area, kitchen, entertainment and indoor swimming area. Above that is the entrance lobby, study, and children’s rooms while the master bedrooms are on the upper level. The design of the building is derived from the landscape, and makes perfect use of the forest around it. 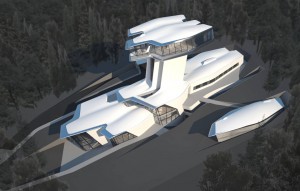 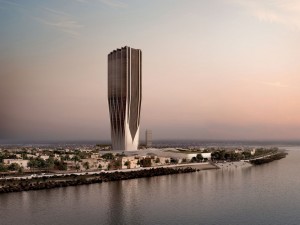 On the banks of the Tigris River in Baghdad, is where the towering Central Bank of Iraq will be, designed by Zaha Hadid and her colleagues. The building exemplifies “the core values at the heart of the institution: Solidity, Stability, and Sustainability.” It will stand at 170 m (557.743 ft), with an internal area of 90,000 sq. ft. The tower starts narrow, widens in the middle, and tapers off at the top; all of this increases efficiency. The building has an exoskeleton on its facade that gives the tower its structure. It covers the building at the base, but opens up and lightens as you travel up, to let in natural light and allow panoramic views of Baghdad. Facing the river, the exoskeleton facade peels off to the side to allow for a view of the river all the way up the side of the tower. 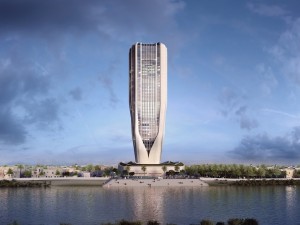 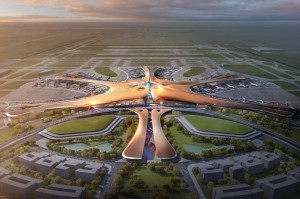 The terminal for the Beijing New Airport was designed by Iraqi-born architect Zaha Hadid and her team. It is a six-spoked wheel, and in the middle is a central, multi-tiered meeting area for passengers. The spokes of the wheel and the compact design enable people to easily walk to and from the different gates, instead of needing to use a tram system. They also separate international and domestic travel on different levels. The entire design is to maximize utility while minimizing space. This also helps to reduce the terminal’s carbon footprint. 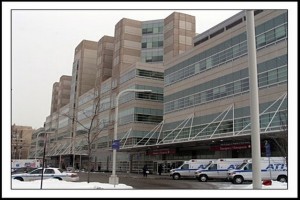 John Stroger hospital has a very industrial look to it. The façade is full of windows and brick, and has many different levels to it. It is the hospital that the old TV drama ER was based off of. It is also the first hospital that I ever got to shadow people at. I took a summer course in Chicago my sophomore year of high school and we got to see some of the old hospitals around the area, and tour Northwestern University’s medical center as well. We got to ride in the emergency elevator that took us up 10 floors in a matter of seconds. It was here that I decided that the medical field is something that I could work in for the rest of my life. 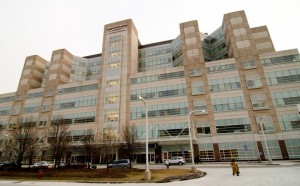 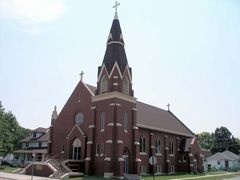 Holy Family Catholic Church is a beautiful little building built with red brick and stone, with a towering spire on one corner. The church hasn’t been updated in my lifetime save for a new paint job in the entry and meeting area. Every time I visit my grandmother we go to church here bright and early on Sunday, then the car home because she lives a few blocks away. The church is the tallest and most beautiful building in the area. My whole family has been baptized here so it holds a special place in my heart. 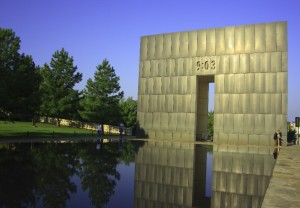 On April 19, 1995 terror struck downtown Oklahoma City. A car bomb went off and destroyed the Alfred P. Murrah Federal Building killing 168 people and injuring many more. Today, in the place of the building is the beautiful and simplistic Oklahoma City National Memorial. The arches have times inscribed, each with symbolic meaning. 9:01: the last moment of peace, 9:02: the moment of destruction, and 9:03: the first moments of recovery. There are 168 empty glass chairs for all those killed, all facing a reflecting pool.

Visiting the memorial has a very ethereal and somber feel to it. I have been multiple times throughout my life but every time I just want to stay silent the whole time purely out of respect for those lost. It has always had a very powerful effect on me and I hope it gives people the same feeling of hope that it gives to me. 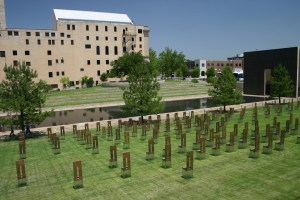 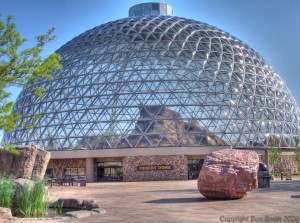 The Henry Doorly Zoo in Omaha, Nebraska is massive. It now covers about 130 acres of land just in sight of the Missouri River in Omaha. It used to share a parking lot with Rosenblatt Stadium but it was torn down in 2012. The zoo has done nothing but expand and update since I was little. It features an indoor desert in the Desert Dome, and underneath that is the largest indoor swamp attraction, dubbed Creatures of the Night. There is also a large indoor rainforest with multiple levels, an aquarium, train track, and there are different large complexes for each kind of animal. My parents are originally from Iowa, just across the river, so this zoo has been a huge part of my life from the beginning. There are many places we would go for picnics or go to the large IMAX theater to watch a documentary in 3D. 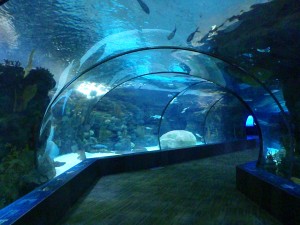 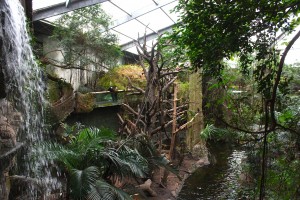