Last year, as a freshman, I lived in the Walker Tower dorms. Along with Couch and Adams Towers, it stands apart as having a wildly unique building design. It’s a twelve-story building in the shape of a plus sign, with four wings that project outward from the center. The outside of the building is all covered in brick, and each wing is an alternating series of vertical stripes of inset windows or brick. The inset windows and the ends of each wing are decorated with large off-white square projecting ledges, one layer to each floor, giving the building a spiny appearance. 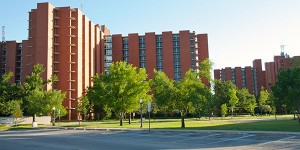 Most buildings have a rectangular footprint, or at least a compact footprint, especially tall buildings with double-digit numbers of floors. Walker Tower, however, sprawls outwards, seeming to stretch and extend rather than be compact and efficient. I suppose that it was probably built with tornadoes in mind, because a wider base with extensions makes it more stable and less prone to toppling. However, it has the effect of sequestering the building into sharply separated halls. The two west halls are for boys, and the two east halls are for girls. On some floors, the two boys’ halls are connected to each other, as are the two girls’ halls, but on others, they’re divided into non-adjoining north/south halls, creating even more of a compartment atmosphere.

The outside of the building, with its ledges and recessions, seemed to me to suggest a hive, which was the main impression the dorms left on me. Divisions and subdivisions; I’m delineated by building, floor, side, hall, suite, room. My room felt like my little corner, a bubble, of sorts, a compartment tucked away in the middle of this massive hive. Maybe if I’d spent more time with people on my floor and hanging out in other rooms on my floor, it would have felt more communal, but the way that the hallways radiate away from each other, rather than running parallel, certainly contributed to the niche feeling.

In no way is Walker Tower an elegant building. The outside is jagged, all corners, edges, points, and right angles. It comes out of the ground and rises directly upward until it stops. It isn’t ugly, per se, but it certainly took some time to adjust to. 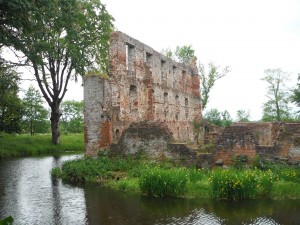 I was in Europe with my sister a year and a half ago. We went up to Denmark for a few days to visit a friend of hers, and he took us to see some old ruins of a castle named Trøjborg Castle, in the southwestern part of the country. It’s tucked away in the woods, and it’s deserted and open, so we were able to walk all around and climb on it. I was struck by how solid it was, even though it’s hundreds and hundreds of years old. One large outer wall full of arches is left nearly fully standing, and scattered around the area inside the moat are crumbling outlines of towers, main buildings, a courtyard, and other outer walls. Everything was built of brick around concrete. 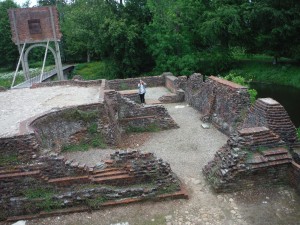 The whole scene—remnants of walls, the outlines of stairs, the hints at rooms and chambers, and the fractured courtyard—seemed to me a memory of the way people used to live. Walking through it, I could almost see the towering building full of rooms, halls, servants, activity, and people going about their lives. They were people no different than me, who had the same desire to get through each day and to be productive with their life; although the structure of their lives was totally unlike the structure of mine, their lives were as important. They lived, worked, ate, slept, grew up, and died thousands of miles from me, hundreds and hundreds of years away; I’ll never know anything about them, their faces, their names, or what they thought and wanted, but their lives and their thoughts were just as real as mine. It reminded me that the world is bigger than me in time as well as geography.

I couldn’t believe that the ruins are open for the public to enter into and explore, but I’m so glad they were. When I was younger, I always wanted to explore woods and other places, but it seems the best places are always not allowed. I’m glad there are still quiet, secluded, interesting places out there to find. 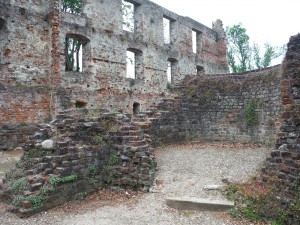