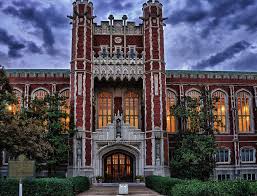 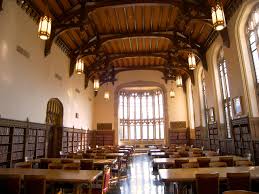 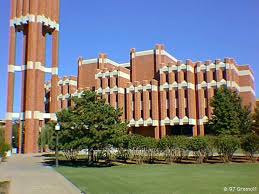 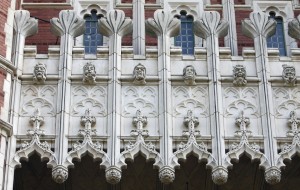 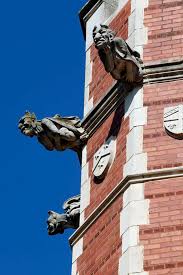 Like many here I am very fond of the Bizzell Library here at the University of Oklahoma. It is definitely one of the cornerstones of the University. Unlike most buildings there is a lot of statues decorating this the outside edges of this building, specifically in the front entrance area. Many of these are gargoyles and faces that are very well crafted and some are actually kind of creepy. Either way they all add to the look of the library and helps make it fit in the category of Cherokee Gothic Architecture. The Great Reading Room is another great example of the architecture of the building, with its staggering ceilings, and wooden arches. It is nice while spending several nights a week studying at this establishment to be able to look around and admire the layout of the building. 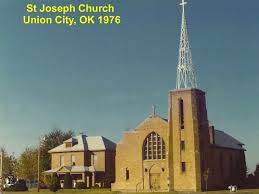 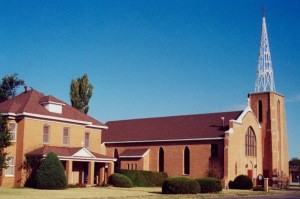 This is a small church that I grew up visiting in Union City, Oklahoma. This church has gone through several phases in its existence. It was first build in 1893, but was soon destroyed by a tornado in 1893, then by a fire in 1930. If all of that wasn’t enough it was again hit by a tornado and partially destroyed in 1973. It was restore to its current state later that year and is a great example of a beautiful, small town church. My personal favorite experiences here were climbing up the tall winding stair cases under the bell tower that lead to the choir loft that overlooks all of the pews. Another great feature are the numerous stained glass windows, one of which is the entire back wall of the choir loft. When down on the lower level and in the front you can look up at this massive stain glass window and with the sun shining through it is breathe taking. 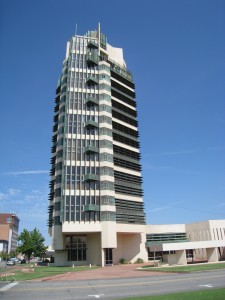 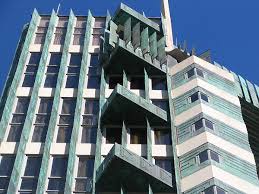 Another building that I really enjoy is that of the Bartlesville Price Tower. It is a 221 foot high in Bartlesville Oklahoma. I was actually able to visit this tower, and took a tour. It’s a very modern looking building, even in regards to buildings of today. It’s very sharp edges, and color scheme really make it stick out. One thing I really like about this tower is how it doesn’t have a set shape. It’s a wide combination of square and triangles to get this very striking look. Also certain corners and edges of the building dont have a real base holding them up. This cuases several edges to be hanging over the ground, which is very cool to me, and how some one found a way to fully support a building even with some parts hanging without supports under them. Definitely worth the trip and would like to visit it again soon. 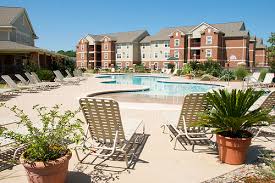 Traditions is the first apartment I’ve ever had and the first place I’ve lived on my own away from family. Traditions represents freedom. Freedom away from my family, I love them dearly, but I was being smothered. I no longer have to get woken up at 3 in the morning getting tech questions or integrated every time I come a little late. Of course now I have to cook for myself, but it’s worth it. The first time I entered Traditions I was exhausted mentally from the car ride I had with my family, but bursting with energy because I had a place all to my own. Of course there has been a few problems with it, leaks, bugs, wifi, and cable to name a few but I’m still excited because being out on my own proves that I’m an adult. And One way to prove that you’re an adult and living on your own for the first time is how broke I am. 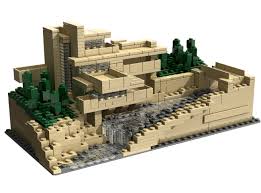 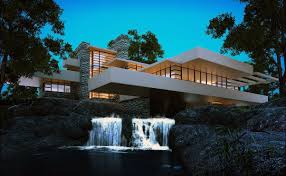 Although I have not traveled much there are still several buildings that have influenced my life. One such building is Falling Water house, designed by Frank Lloyd Wright. As a young kid I actually had a Lego set of this very building, which sparked a love for architecture. It’s a very unique building, and no matter the time of day it is breath taking. It has a very modern feel, with its long, narrow balconies, that are set up on several levels of the house. Also the big windows that make up the entirety of the walls. It really is a stunning house and helped me embrace my creative side. One day I do hope to visit said building and be able to experience this amazing building for myself. 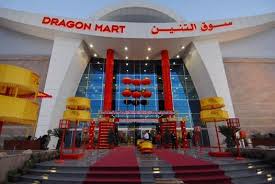 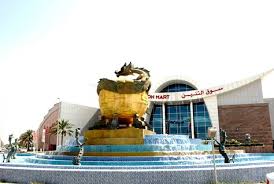 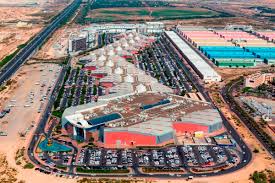 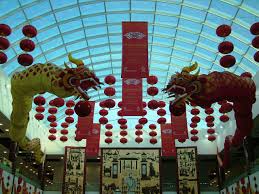 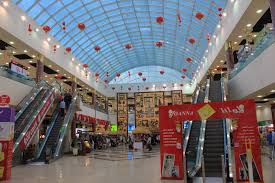 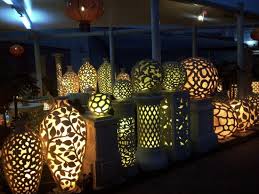 While in Dubai I drove past this place called Dragon Mart. Dubai is a becoming more and more diverse city and because of this they have an increasing Chinese population. Dragon Mart is mostly made up of Asian stores that sell a wide range of products from spices all the way to makeup and clothes. Before you even enter you immediately get a sense of eastern designs mixed with western architecture. Dragon Mart is the largest and one of the only places where people can acquire authentic Asian products besides the common items you can find in the super markets. It’s like an oasis, I say that because it’s located kind in the middle of nowhere. I’m not even exaggerating there’s like nothing near it, it’s a half hour away from the city and between them is nothing but sand and the mountain that was cut through in order to make a more convenient high way. When I first went in I had butterflies in my stomach because there are some shops you can haggle in and I had four years of Chinese I wanted to try out. I haggled a little, but kind of chickened out and didn’t get the price as low as I probably could have. Dragon Mart represents a bridge between two different cultures, both embracing each other’s differences and as nice reminder of home for those who were working abroad. 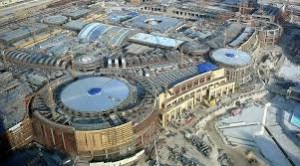 The Dubai didn’t seem like a mall to me because of my idea of mall in America. It has an aquarium, high end shops and restaurants (several people actually conduct international business dinners in the mall, mainly because it’s one of the few places you can actually get alcohol), carnival rides, an ice rink, and several other things that I didn’t even get to see, and I went several times. While visiting my family I asked to go to the mall because I read in the national geographic that the mall contained an ATM that contained gold bars. Part of the reason I didn’t get to see the entire mall besides it being 50 football stadiums long was because I waited like a creep behind some plants to see if anyone actually uses the gold bar ATM. The mall contains a mixture of western and eastern architecture.
The stores and entertainment facilities that were more American/ European kept the normal western designs, but the decorations, lighting, and color palette was all eastern mostly middle eastern and Indian, with a few touches of Chinese designs. There’s also a nice water fountain show outside that goes on every half hour, that was inspired by the ones you see in Vegas, except they added their own music to it and more colors. The first thing I experienced when entering was excitement and curiosity, mainly because I wanted to see who was going to use the gold bar ATM and what on earth you even buy with a gold bar. Maybe a car, anyway as soon as you enter you feel welcome because there’s something for everyone, it’s designed for tourists and locals. Malls are meant to be communal gatherings with something for everyone and the Dubai mall really captures that idea, there were even some places were you could haggle.